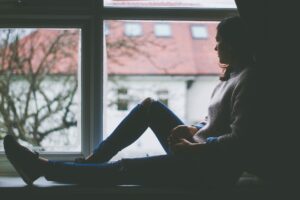 1. Self-Rating (Labeling/Downing): People sometimes choose to rate themselves and others based on accomplishment and performance and are often trying to measure up or prove themselves.  This can be dangerous when paired with perceived or real failure/making a mistake as it can often create feelings of guilt, shame, worthlessness and urges to engage in self-punishment/condemnation.

2. Avoidance (Procrastination): People may choose to avoid taking healthy risks and fear people, places and things that are perceived as dangerous or fearsome.  This will often promote feelings of anxiety that can often lead to even greater compounded problems and thus further avoidance/further problems in the future. Extreme avoidance can lead to crippling phobias and possibly even agoraphobia (fear of leaving the home).

3. Utopian Expectations (Demandingness): People will sometimes expect to get everything they want and/or to avoid everything they find painful.  They often waste time striving for the unattainable or for unrealistic perfection. They will often say to themselves or others that they “Must/should/ have to” get what they want. This is commonly connected to dangerous feelings of anger, rage, and hurt and behaviors that could lead to unhealthy confrontations and consequences.

4. Low Frustration Tolerance (Can’t Stand This!): People often engage in self-talk of: “I can’t stand this!” “This is too difficult!” “This is impossible!” and quickly give up on a problem, conflict or goal.  They often confuse what they can control and what they cannot and tend to ruminate and wallow in what they cannot control. They may often tell themselves that what they can do is “too difficult” leading feelings of depression and further helplessness and hopelessness.

5. Blaming (Not taking emotional responsibility): People are sometimes quick to blame others and the world for their distress and will not take responsibility for their thoughts, feelings or actions.  They will commonly point out that events/people cause their problems and that they cannot control their thoughts, feelings or actions to any degree. This will often lead to feelings of anger and hurt connected to a person being stuck unless their environment changes.

6. Selflessness (People Pleasing): People tend to sometimes put the interests of others above their own self-interest at all costs. They will often completely sacrifice themselves for another person and will ignore their own health/desires putting them at risk for a possible physical and emotional breakdown. Feelings of anxiety and guilt are common in these states of being.

7. Selfishness (Social Disinterest): Some people live in isolation and disconnect from others often out of fear or mistrust.  They often do not act morally and do not protect or validate the rights of others. Although this may be temporarily pleasing for the individual, it can be a factor in the degradation of society or community in which they live in and can contribute to greater unhappiness in the long run.

8. Enmeshment (Dependency): Some people assume that their happiness is directly linked to another (commonly a loved one).  They will often demand or convince themselves that they need support or nurturance from others and that they cannot function without it. They will often strongly believe that they will remain “broken” or “lost” without that particular person in their lives. Feelings of depression and anxiety are common when their particular bond is severed.

9. Global Rating of Others (Intolerance): People will sometimes tend to harshly judge or criticize others when mistakes or errors are made. They do not allow others the right to be wrong and instead hold that it is a necessary condition to punish or damn others for being imperfect. This way of thinking and acting can create a system of hate and violence, which can lead to further problems and conflict.

10. Rigidity (Distorted Thinking): People will sometimes engage in rigid or black and white thinking.  They are unable to formulate rules with any kind of flexibility and when these rules are broken, they tend to reduce happiness and increase emotional disturbance. They will often convince themselves that what they believe “has to be true” even without sufficient or conflicting evidence.

11. Fear of Uncertainty (Control): People with this thinking strongly believe that they must, with absolute certainty, know the outcome of the future or have complete control over a person, place or thing.  They will often create or “write” their own futures so that if it does occur they can justify their belief in the first place (self-fulfilling prophecy). This can create a vicious cycle of self defeat often leading to further depression, anxiety and hopelessness.

12. Inertia (Lack of doing): When in this irrational state of mind, people tend to strongly believe that they “should” just be happy or successful with minimal effort required of them. They are often so self-absorbed in their misery that they lack doing any activities that may promote further happiness, consecutiveness or success which can lead to further inactivity and procrastination. Feelings of depression and hopelessness are commonly connected to this state of mind.