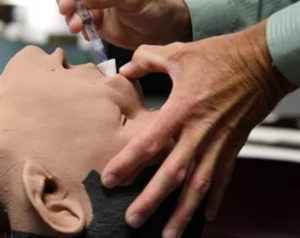 Naloxone, trademarked as Narcan, is an opiate antagonist which counteracts the life-threatening depression of the central nervous system and respiratory system caused by an opiate overdose. This medication has the potential to reverse possibly fatal opiate overdose. Narcan, which is a spray delivered through the nose, is being distributed in emergency treatment kits for heroin overdose in every county in the state. Each kit contains the drug, a nasal applicator and an atomization device that converts the medication into a spray. The kits have a shelf-life of a little more than 18 months.

Distribution of Narcan gained publicity in March of 2014, when more than 28,000 EMTs signed waivers certifying them to carry and administer the drug. In less than a month, the drug had helped save more than 40 lives in Ocean County, where a largest increase in heroin overdose has been seen. By April, Governor Chris Christie announced a pilot program for Monmouth and Ocean counties which allowed law enforcement to also carry and administer the drug.  There has been a demand for an expansion since the program has proven to be successful. Gov. Christie plans to expand the program to all state police officers and local law-enforcement offices across all 21 counties.  Update per Dr. Singh: Recently, Narcan was used in Hamilton Township (Mercer County) to reverse overdose in a young adult male, saving his life.

A recent report from the Task Force on Heroin and Other Opiate Use by New Jersey’s Youth and Young Adults described the “skyrocketing use of heroin and other opiates” as the “number one health care crisis confronting New Jersey.” According to the state attorney general’s office, there were 449 deaths reportedly caused by heroin and morphine in 2011. Heroin use has risen drastically in New Jersey since then, with reports on overdose deaths climbing to 591 in 2012, and 380 in the first six months of 2013.

A former DEA agent, Michael Pasterchick, from Monmouth County has stated that, although the levels vary, the purity of street samples can be as high as 95 percent. New Jersey, therefore, has some of the purest heroin in the nation.

In May of 2013, the Department of Health Office of Emergency Medical Services issued the Overdose Prevention Act which aided in reducing the fear associated with reporting opioid overdoses. The Act provides immunity for civil and criminal liability for people who are not healthcare professionals, who administer Narcan in an emergency. In combination with the Overdose Prevention Act, the New Jersey Department of Health estimates that the use of Narcan saves roughly 12-20 lives a month.  Due to immunity regulations, the public is able to have naloxone in their home and some experts even encourage the public to pick up a prescription at a local pharmacist.

For those seeking professional help with substance abuse issues, Center For Wellness is an Intensive Outpatient Program offering ethical, evidence-based treatment to adults and adolescents. Clients are encouraged to participate in a variety of individual and group therapies designed to develop the tools necessary to succeed in recovery.   Please visit our website at www.centerforwellnessnj.com to learn more about our programs and how we can be of assistance.

This article was written by Danielle Feldman, LAC – Substance Abuse Counselor at Center For Wellness, with input from Dr. Gagandeep Singh – Owner/Executive Director